“Where do your ideas come from?” is the nightmare question all writers hate and most non-writers seem to instinctively have to ask. Harlan Ellison, famous grumpy author, said he sent a cheque to Schenectady, New York to an old guy who would send him a handful of ideas.

There are some projects which definitely come from somewhere. Some stories might be thinly-veiled biographical pieces (I only realised The Battle of Jenkins Insurance was after having written it), some come from daydreams (Shelter), and then the majority just… arrive. They turn up at my door, and I can’t turn them down. Once I’ve thought about the story, I can’t unthink it. Even when something like Tiny Broken Doll-Faced Man appears, which was a last-second moment of inspiration for one of Chuck Wendig’s contests. I thought I’d miss the deadline as I was too busy elsewhere. Then the boy’s jumper with tiny doll-heads stitched into it appeared, and then the horrible findings of the child, and the end, which surprised even me.

Ideas are weird, but I love them. Genre, I’ve found, is another issue. People often ask what I write, so I say, “Short stories, novels, comic and television scripts” to be facetious. I can’t put my finger on a genre for the books I write, and I’d find having one single genre focus to be uncomfortable. Back when Marvel & DC weren’t acting like jerks, I wanted to write for them, and have a folder of pitches when I thought I’d test myself by making an idea for a property I had no real care for. It’s how I have an Elektra pitch, and a Silver Surfer one, and one for Adam X “The X-Treme”. The challenge was interesting, and I like the idea of writing for areas outside of my influences.

Advice-wise, I can’t tell you how to get ideas, or where to get them. I’m sorry. I will say, however, what the ideas are for my novels so far. Once you’ve got your idea, being able to communicate it in a small space is great. Not only can you always refer back to that when you feel like you’re losing your way, but you will be a step ahead when it comes to the pitch.

Genre: Horror. Although I only found that out half-way through.

A bit more: Sixteen people who barely know each other are stuck together in a run-down departure lounge in a Greek airport. No one else is there, the departure board is gone. They become a community through desperation and tear themselves apart almost as fast.

I came up with this… I don’t know, around 2004 or so. I was in my Creative Writing CCE at The University of Sussex and while I was in the middle of a love affair with the short story, wrote a draft of the prologue. It was featured in Panthers & Polyanthers, the 2007 collection of graduate’s work. It fermented for a little time before I used it for NaNoWriMo.

A bit more: Three families are brought together by the death of Bill Parker, and sixteen years later when he returns to find himself a father, he threatens to ruin the fragile status quo. Scott Pilgrim & Spaced if they both got in all the sugar, gained powers and punched people in the head.

One day, probably before publishing Lightning, I shall write a biography of this project. On July 18th, 1987, when the bolt of lightning hit, this… or at least a form of this, was left. Bill Parker, back then, “Electricity Man” arrived. I wrote enough to be noticed, and my teachers realised that I wasn’t “slow”, but had dyspraxia. At least, two years later, they would reach that point. It’s changed so much over time, and now is a totally different beast. It’s been a high-science fiction prose piece, a 90’s Marvel-ish comic, a Buffy/Ranma-ish comic, then three drafts of a novel having extracted the capes, tights, codenames and having become what it was at the core all this time. A positive tale of powers representing the issues of the cast, of love both gained and lost, of people who lived vicariously through pop culture, of weird families and how you don’t even need to be a human being to have humanity.

Idea: An order of modern ‘knights’ who keep the balance between the mundane and the supernatural in a London infested with mythological beasts and everyday magic just out of our vision.

A bit more: In 1999, the Knights of London are almost all killed, leaving Preston Howell and Leila Ward to face off against warring goblin hoodies, minotaurs in the London Underground, ghosts, bee-people and vengeful magicians. They enlist a handful of surviving, broken Knights and recruit three new people to the cause, revealing the hidden London to them.

This was created around 2002 or so. It’s scary to think that beginning the story in New Year’s Eve 1998 was an arbitrary move back then, now it makes the book a period drama.

A lot of writers say that they don’t read the medium they write in. It seems to be a reflex, and not one you have to follow. I’m a media sponge. I love television, books, comics, short stories, films, video games… basically anything. I take in vast amounts of media, a wide array of genres. There’s always the fear of plagiarising something which is already out there, of being too influenced by a piece of media, which is why I often like to keep track of the influences which can affect me during a project. This way I can be mindful of what’s there, avoid or inject that influence as necessary. I have proofreaders who are savvy enough and if necessary I can provide them with the same influence lists so that they will be able to point out if I’m being too influenced. I think enough of my projects have enough of a wide scope that none of them are exactly like one thing or another. Here, again, are my examples from previous years:

So the influences go all over the place, and have personal ties, too. It could be a building, a holiday, a moment like when my family first discovered bagels and seriously botched trying to figure out how they worked. That has ended up in Lightning where an alien dad reacclimatises to Earth with a family who will mock him for the lack of knowledge.

I also have no shame, apparently, going from Jane Austen’s classics to the martial arts mayhem and gender-swapping of Rumiko Takahashi’s Ranma 1/2. Thematically they both fit, and hopefully Lightning works because of the strange mish-mash.

This year’s idea came to me on a train back from my father’s in mid/late August. It was a lovely day, and I was stuck with a very loud family around me, a toddler playing with loud apps on a pink-cased iPhone with a broken screen. I was trying to read at first, and the challenge of that seemed to plunge me into a meditative state, drifting in and out of the novel. Eventually I resorted to looking out into the Kentish landscape as it whizzed by, losing myself in some music, and out of nowhere, this story appeared.

The first idea was, “What if someone tried to fake a school shooting?” but then that had to expand. It was big, ludicrous and a little bit insane, so with that, I had to start thinking of, “Why?” The proper motivation didn’t get hammered out for a little time, but the initial notes show how my brain was working everything out bit by bit. Once thought, it can’t be unthought, after all. I pride myself on being able to face pretty much any problem with a couple of minutes to freak out, then a scheme will form.

I love modern technology, and as the idea was forming, I wrote in EverNote:

And it all went downhill from there.

Almost Fiasco style. A pair of kids plan to fake a school shooting for some reason. They begin to get some people on side, the artist, for instance, who thinks it’s a perfect piece of bad taste performance work. Some ringers who will fake injury, or suffer minor real ones for the sake of the project. It becomes a labour of love and expands in the elaborate schemes until the tilt.

The shooting itself goes hideously wrong. Fake weapons and real ones mixed up, panic makes the populace uncontrollable, some police are stupid “hero” types who go in too gung ho, some are useless and it all goes awry.

Things have changed since then. The useless types will be the ones to have their hero moment, and well, I’m not going to reveal what else does or doesn’t work.

You’ll note a couple of things. Firstly, no characters yet. The plot came first, and the characters came about a day after this. I’ll get to them in a later part. The MacGuffin to inspire the action wasn’t thought of until a couple of weeks later. I reference Fiasco, possibly my favourite RPG which calls itself, “a game of people with high ambition and low impulse control”, so no wonder it’s a favourite. Also, “and it all goes awry” has become a common trope amongst some writers I’ve been in groups with, comparable to, “hijinks ensue”.

It’s really quite rough, but that was the moment of inception, caught right there. An idea, no matter how small or weird takes time to percolate. I went back to reading Barry Nugent’s “Fallen Heroes” and left it for the train trip. Then, when I realised this could be a whole novel, I bought a special notepad. It was from a back to school range and felt apt. Behold my shiny new pad! 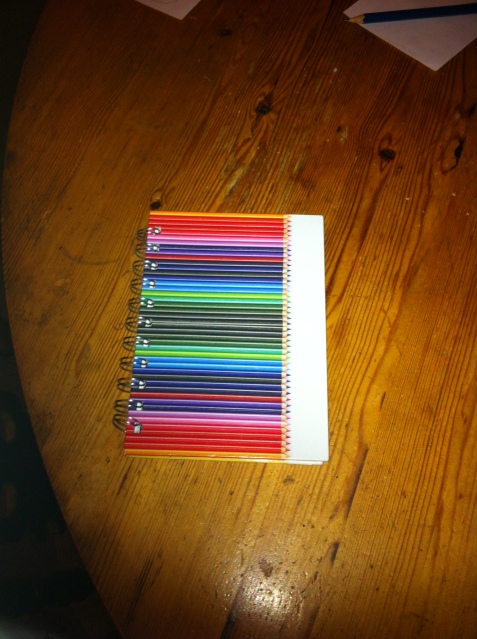 As it currently stands, there’s a long list of influences. They are as follows:

I know there are a bunch of sources I should check out. The books Nothing, Freaks & Revelations, Bringing Down the House, New Rules of High School and 19 Minutes. Also the films Oceans 11 (yes, I’ve never seen it), To Die For, Slacker, Wassup Rockers, Another Day in Paradise and S.F.W. I have Die Welle (The Wave) which I’ll be watching next week, too.

Something I find interesting is that this is my second novel featuring kids in high school (aged seventeen here, fourteen to eighteen in Lightning) and yet the influence list is entirely different. I’m quite pleased about that. Also some of these have similar themes and ideas instead of what’s externally happening in them. There are a lot of moods and a lot of styles captured in this list, and the logline higher up was weeded out from some of these influences. Some of these influences may be discarded, others might add to it. The friendship arc of the characters is taking a bit of an It & Stand By Me flavour in my mind right now, but that could all change.

So that’s it, my big idea and my current list of influences. If you’ve any more to add which I might find interesting, please leave them in the comments.

NEXT: Theme and Mood