The Mist in the Bridge 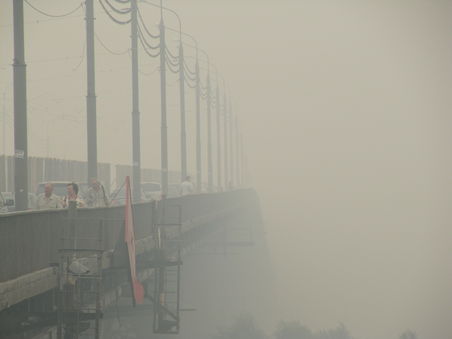 The last of the six pack dangles from where it’s handcuffed to me by a plastic ring which once held its brother. The cans are somewhere down the road, but littering isn’t on my mind right now.

I heard about the bridge, about what it could do, so I decided I’d have a look myself. The bridge and me, we’ve got history. It’s an old metal bastard who’s been turning the colour of rust as time’s gone on. No one bothered fixing it, after all, you only go across the bridge if you want to take the long way out of town, past the few patches of green by the river, along a road cracked open after years of heat and neglect. The dirt slope down starts a little before the bridge itself kicks in and I’m sure one day the whole thing will slip into the river when there’s a strong storm. I long for that day. The bridge took Julia from me and should follow after her, that might make us even.

I realised too late that she was always fading away from me, even when we were together, even when we were happy. The shadow always lurked behind her, waiting for the opportunity to strike. I tried to help whenever I was around, but on a week I was stuck out of town on business, she found herself at the bridge, away from anyone who could stop her.

After she passed, so did the years, faster and uglier than I thought they would. I lost some to alcohol, some to my own depression. In all that time I never saw cause to go to the bridge, to see my wife’s killer, not until I heard about old Mr Illingsworth from town who first saw the mist in the bridge. It seemed trapped there, caged by its’ rusted walls, but when he drove through he found the town he’d just left. It was identical to the point where someone in the exact same old Ford drove past, on the way to our town. They both turned right round and had a look at each other. Mr Illingsworth was face to face with his brother who’d died several years earlier in a bus crash which nearly claimed him, too. The brothers talked about the way their lives went before and after that day. Apparently the crash was the first difference either could think of. They went away, but Mr Illingsworth was invited round to his brother’s place for dinner a week from now, to see nephews he’d never been able to see.

I figured; if it could work for him, maybe it would for me, too. The six pack were to keep me company on the way out of town, towards the bridge and the hope that my wife was there, beyond the mist. If she wasn’t there, maybe I’d follow her down to the river and the rocks below.

The bridge looms ahead, the mist trapped within the rusted metal barriers. Behind it, the scrub and the night. I carefully make my way down the slope and onto the bridge, carefully stepping along it, letting the mist move around me. In the distance I can see the faint glow, the lights of a town I know to be behind me. I look back anyway instinctively and of course it’s still there. At this point, I’m pretty much in the middle of the bridge; both my town and theirs look identical through the mist. Would I know which was mine? If Julia was in the other town, would I care? Maybe I jumped instead of her in that world. Maybe I tried harder. I might have never left town or insisted she carry on with her therapy.

Someone moves through the mist towards me. Her name is on my lips, the can hidden away in case she sees it. The figure gets closer to me and at the same time we both say, “Hello?”
The reflection is my own, not hers. He holds his can up defensively, ready to strike. He’s not realised who it is yet, he just knows it’s not Julia.
“It’s me,” I say.
“Oh.”
We’re both close enough to be visible to one another. There’s a little difference here and there, but not much. He’s wearing a shirt I spilt red wine on and threw away a year ago. I’m trying to keep my walking boots going for another few weeks while he’s given up and gone with trainers. We both have a single can of beer left, mine dangles behind my back and his is gripped tightly.
“I thought she still might be…” he starts.
“So did I.”
“But she’s not, is she?”
He doesn’t need to answer. I look towards the edge of the bridge but the mist hides the drop down into the water. We both decide to sit on the edge, leaning out of the mist and looking at the river. It’s a bigger drop than you’d think to first look at it. We open our beers together, we start to drink and we start to talk about her. I’ve not really opened up to anyone about what happened, but it’s easy to relate to yourself. Our anecdotes are different, not wrong though. There are dates I never went on, ones he never did. I know how both our stories will end, but it’s beautiful nonetheless. Seeing it from the outside, I feel more at peace with her, with myself and with the bridge. Hopefully he does, too.
We part ways and I start to pick up the empty cans on the way back home, imagining my counterpart doing the same in his world. In both worlds, the bridge just watches us go.