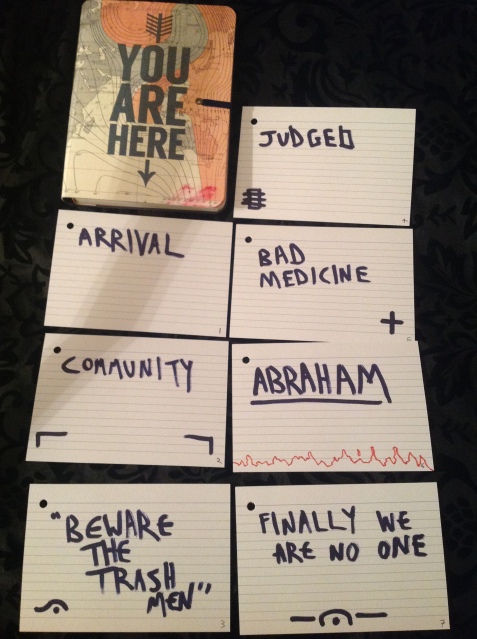 My nice new notepad and the chapter headers

In National Novel Writing Month there’s one challenge; writing 50,000 words in one month. The thing is, there are so many different ways to get that done and so many ways to prepare for it. I’m going to go through a couple of them, including mine. This is all based on my experience and something which I’m sure will differ from person to person. One of the great things about being a writer is that it’s all so varied how we go about the process.

TEAM PLOTTER VERSUS TEAM PANTSER
Versus may be a bit of a misnomer, but if there’s anything close to a divide in NaNoWriMo writers, it seems to be those with a plan and those drawing on raw inspiration and panic.
Plotters are people who plan in advance what they’re going to do and at an extreme level they have character studies, scene breakdowns and the like. They might already have a draft done which they’re reworking or know this is their time to set out a new draft.
Pantsers fly by the seat of their pants. They may enter with a rough idea but for the most part they’ll be entering each day with a rough plan, drawing from plot generators or letting the characters and events lead the way in their story.

Despite being a fan of arbitrary and unnecessary warring over things, this is actually more of a scale than anything else. As someone firmly in the plotting camp, I still plan events out with enough room for change if the characters surprise me once I’m writing. This happens to me most years; I come up with an outline and design for a character and once I’m in their skin and writing their behaviour then things change. I guess that’s like an actor taking on a scripted role and making it their own. Still, I like some leeway for that and for the events themselves to change, even if I know the main action in the scene. As an example, in my NaNoWriMo 2012, a heist story, I killed a couple more cast members than I intended and shocked myself with the turn of events. In my first NaNoWriMo I had a realisation maybe half way through the book that the genre was actually horror, something I hadn’t gone in expecting at all.

PANTSERS
This late in October, if you’ve not actually figured out what you’re writing then you’re probably one of these guys. That’s okay, especially if you have a community on or offline who can help throw random pieces of inspiration at you from time to time.
Pantsing has a kind of romanticism to it. You’re opening your brain up and letting raw inspiration take the wheel. It’s interesting and artistic, whimsical and fun. It’s also rather difficult. There are some writers this is completely perfect for but writing is a bodily function as Chuck Wendig has said. It’s something you can train, exercise and get ready for this sort of challenge so you don’t burn out.
Preparation for pantsing NaNoWriMo is the easiest; just have something to write on be it a notepad, desktop, laptop or whatever. It might be good to plan contingencies like having random tables of plots, story dice or something along those lines.
I’ve known a bunch of pantsers in my time in NaNoWriMo, many of whom have run out of steam or stalled. This is okay, if you made any words in this month then that’s fine. There are ways to mitigate this. Some writers I know have changed their project entirely half-way through, which is totally acceptable in NaNoWriMo terms. Others have used random plot devices to get through the event. We have something called The Panic Jar. If you need a plot element then you draw a piece of paper with a little nugget of inspiration from a jar the MLs have. In our community the jar is a great tool and a threat. All the entries are put in by other writers, either feeling nice or cruel. Whatever’s there, you add it to your book.
One writer used only entries from the Panic Jar for his novel one year, drawing 48 plot elements from the jar and forum challenges on www.nanowrimo.org. He put his protagonist through them. He was a brave soul to trust in all of us that much and managed to win NaNoWriMo with a story (and his sanity) intact. This year he’ll be dual-wielding stories instead, but he has served as inspiration to others who have decided to take random plot elements for
Even if you want to pants NaNoWriMo, a little bit of stability to then riff off would be great to help sustain you; whether it’s knowing your character well enough to know how they’ll react to all the things you’ll throw at them, or maybe just the theme, the tone… one thing can help you ground it enough to carry you through the rest.

PLOTTERS
This is very much my domain, so I’ll be covering it a bit more. In a previous year I wrote something like eight NaNoWriMo articles about this sort of thing and they are still here on the site, but I’ll be making it shorter as we’ve all got little time until it’s here.
Plotting might mean you’ve got enough of a plan that literally all you need is time with your fingers on keys. That’s how I dealt with the last few NaNoWriMos and novel writing I’ve done between them. Yes, characters still surprise me. Yes, twists can happen, but the skeleton of the book is there. Here’s how I figure things out and as I said, the pantser/plotter thing is more a scale than anything else, so feel free to follow as much or little of this as possible:

THE CONCEPTUAL STAGE
Logline & Synopsis
This is in theory the easiest: “What is my book about?”
When someone asks you, “What the hell is this nanny rummy thing? What are you writing about?” Can you pitch it to them in a sentence or two. Working on the elevator pitch is good anyway, so if you can have the logline of your book worked out this early, you’ve got a touchstone you can keep coming back to.
You can go from there to a synopsis; in fact the NaNoWriMo website actually has a space where you can put your book’s synopsis. That’s a good thing to see in front of you and have to fill out. Think of this like the blurb in the back of your book, or a grown up version of your logline. Now you’ve got your basic concept expanded a little.

Theme, Mood & Tone
These are things which I’ve actually stolen from the World of Darkness RPG but they’re great for reminders of what you’re writing about. Like the logline, it’s something you can keep coming back to and reminding yourself what the book’s going to be about.
Theme – Every story is about something. It doesn’t need to be overtly stated, but something underlying in the text. It could be said that Buffy the Vampire Slayer is about how growing up is a monstrous experience not unlike facing the end of the world. Lost was about personal journeys, redemption and rebirth. These are personal reads on them and I’m sure others have different versions, but knowing even slightly what your theme is means you’ve got some control over the message.
Mood & Tone – Is your story gritty and grimdark, where only the most brutal fighter can win? Is it something where good intentions will resolve the day? These are two elements which are closely linked but I still like to count them as different as I’ve often had some disparity between the two. Mood is more of the underlying mood of the piece, is it something where the mood is fairly relaxed or constantly pressured? It might not be openly stated in the story but you know it’s there and can keep returning to it. The Tone is more active, something to have in the voice of the piece. Are you going to have a funny horror story? Are the people going to quip their way through things? I see this more to do with the voice than ‘mood. 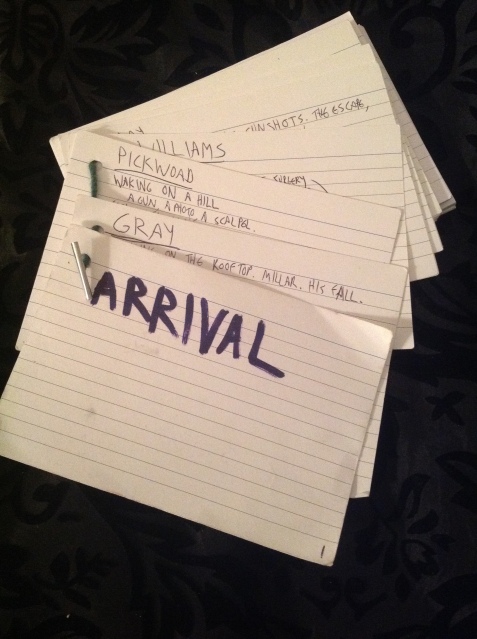 Chapter One and the opening scenes.

AMNESIAC CITY
My NaNoWriMo 2014 is of course, plotted pretty thoroughly.
My logline is: “A city of over a million people where no one has their memories, where monsters come out at night to remove ‘unnecessary’ people.”
My synopsis is: “If you had no memory of who you were, of where you were, or where you belonged, what would you do? In the city of Naraka, one million people wake with no memory, no identification apart from a magnetic card with a surname. They’ve suffered some kind of city-wide attack, and of course, no one can remember what happened. The fallout is immediate and horrible. People’s minds break at the prospect of losing all they were. Each amnesiac wakes with their ID card and one random item, many of which are weapons. A suburban apocalypse ensues, with people trying to restore order and unite the citizens against those who have snapped. While some want to restore the city’s order, others want answers. Camps who oppose the city take up residence in nearby box stores, several cults have their own interpretation of what the city wants, but Naraka has its say in the end. It always does. It is times like this people find out who they are, even if they don’t know who they were.”

The theme is, “Who are you when you lose everything?”

The mood is, “mysterious and apocalyptic, tinged with an undefinable loss.”

The tone is, “dark and confused.”

TO WRAP UP
Even a little bit of a plan is good, but do what feels right for you and your story. These are what works for me and has for the last two NaNoWriMos (and this one, hopefully).
Everything I said up top, that can change. If you set a logline or a tone or anything like that, you can change it as you write and realise that your comedy was a mystery, that you had no known theme but later on you know what you’re talking about. You’re not locked in on anything, other than your aspiration to write 50,000 words.