Lijah Ramone isn’t your usual abductor. She’s someone who appears to have no impulse control. She hit and killed a pedestrian on his way home from work; it’s still unclear whether that was intentional. What Lijah probably didn’t expect was the police car turning into the road at the perfect time to witness the crime. A high speed pursuit followed, ending with her swerving into an Arby’s, crashing through the window and taking the inhabitants hostage.

We’ve got three members of staff and five customers trapped inside with Lijah, who is armed. She’s incoherent and wants to get out ASAP, she has no other goal at this time. The situation’s escalated out of everyone’s control and this is why I’ve been sent in.

I selected the negotiator “Ana Langston” as she was the one on the conversation cards for the game. She would be able to spend some money in one turn in order to gain a free card later, when it might matter.

It started easily enough; I found out that Lijah wanted a fast bike to get out. Maybe she wanted to leave in style, maybe she thought she’d have a better chance against the police.

Things were patchy at first, but after a few wounded hostages were identified, Lijah was willing to give them up. Her anger kept flaring up though, and while she didn’t hurt any of her hostages, it slowed things down dramatically. She found a secret exit, possibly an old prohibition tunnel, but wasn’t willing to use it yet. She knew we’d rush the place if she tried to leave. Some little compromises on our side and a secret extraction while Lijah was distracted managed to clear all but two people out.

Then the Terror deck ran out. I was out of time with six hostages rescued and two left behind. Lijah won. Damn it. I realised I’d not used Ana’s ability at all, or felt like I had time to, so I switched to a different character.

An Introduction to the Game

Hostage Negotiator is a solo board game, which originally came out on Kickstarter. The theme appealed to me, being something outside of the orcs, zombies, Cthulhus or space kind of genre. I love those, but sometimes variation can really help. That’s where games like Viticulture can be a breath of fresh air.

I spent a lot of time on my own in early 2016, so I became acclimatised to a few solo games. A few of these were featured on Who Dares Rolls, even getting a, “Playing With Ourselves” brand. When I first saw the substantial, interesting-looking Kickstarter for Hostage Negotiator: Crime Wave, I decided to try the original game.

It was good fun, fairly quick and compelling, able to be played over breakfast or while waiting for people to come round.

Hostage Negotiator is a card-drafting game, where your hand consists of ‘Conversation’ cards. Each one gives you the outcomes of good, middling or bad die results. If you’re like me, you’ll get used to the bad results. You play cards, roll dice and hopefully keep the abductor’s temper down while generating currency to buy better Conversation cards. Anything played gets put back in the pile, so you’re not building a deck but investing in temporary resources.

Some cards are essentials, such as the, “Consider This…” card in Crime Wave, which lets you reroll a die when things go wrong. And things will go wrong. 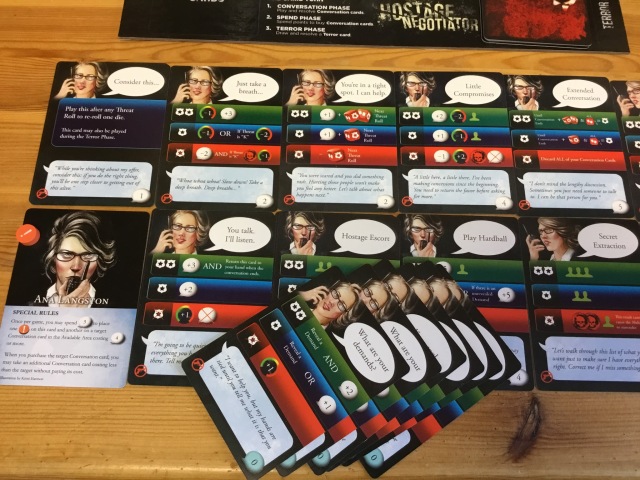 Crime Wave starts out the same kind of size as the original game, but grows from there. You get the cards for the Conversation deck, the Terror cards which add unpredictable events throughout the negotiation and a trio of abductors who each have their own mechanics.

Lijah, the abductor from my first attempt, had the smallest resources. Normally they have their own ‘major demand’ such as money, tenure or medical help for a loved one. Lijah’s hit and run followed by an impromptu hostage situation meant she only wanted to get out alive. She had no major demand, just escape demands, which grew and multiplied the more people left.

The Crime Wave box also included space for the original game (doubling the components I listed above), as well as having dividers for different card types. As extras, there were specific negotiators who could be picked for a once-per-game bonus, a card allowing the abductor to be a mystery to the player initially and seven packs with extra abductors. These range from a crazed CEO to a framed cop to a cult. They all look great and are staying in their packs until I reach them in my playthrough.

Oh, and there are achievements, which I do love in my tabletop games. Scythe had some, which were pretty cool. Sentinels of the Multiverse had some, but they got too numerous for me to bother with.

I picked a different person to take on Lijah; The Defender. This character was a cop who would allow me to reroll all dice if a Threat Roll would kill hostages.

I thought this was going to go far worse than my first try. Bad rolls meant I was generating very little conversation and Lijah’s mood was only worsening. I drew a couple of Terror cards where Lijah got really angry and then would calm a little the next turn. After the first one I panicked, lowered her temper and then the next one hit, which would have caused a death. One person did suffer her wrath though, taking a shot from the Terror deck. They couldn’t have been saved, which is always terrible and a harsh part of these negotiations.

Lijah’s demand was that she simply walk out. This meant rolling dice at the start of every round and if I got all ‘1’ on the dice, she’d leave, probably into police gunfire. Later she demanded a radio which I was more than willing to give to her, secretly extracting some hostages as we went. I played hardball with her and managed to keep her in a fairly good mood despite that.

I hit the final turn with two people left and once that happens, the cards you buy can be used for a final push. Lijah had a human shield, but the person was bleeding out. I asked for them to be surrendered to us. Miraculously I rolled two successes, allowing that hostage and the remaining one to be taken out. With no one else there, Lijjah had to surrender. Phew!

Next time, I’m going to deal with Barrett Mullins. I have no idea who he is, but he’s got a shotgun, so I’m sure this will end well.