Roleplaying Games to Play While You’re Isolated at Home

In times like these when you’re possibly self-isolating, working from home more or just not seeing so many people, you might still want to roleplay. Sure, there are online tools and I might get into those at some point, but maybe you’re not keen on that. Here are some games for one player, some games for groups of two or three and a couple of letter-writing games to try out.

These are not the only RPGs out there, so you might want to have a look for others and provide any suggestions you’ve got in the comments.

Quill by Scott Malthouse is a letter-writing game for one. You pick a character class, each with a different level of Penmanship, Language and Heart. There are several scenarios which you’ll need to navigate by writing a letter and rolling to see how the quality of your penmanship and your choice of words go. It’s an interesting game with several different expansions including Love Letters, a Lovecraftian campaign and an old school D&D version.

Another journaling-type game, where you play the role of a thousand-year-old vampire. You’ve lived too long and memories can only stick around for so long. As you go through this, you start having to discard memories. I’ve only read a prototype of it, having forgotten whether or not I was a late backer in a true act of life imitating gameplay. It looks fascinating and can be bought here.

Scott Malthouse’s Quill may seem a little basic and can be played a couple of times over a lunch hour. If you want something a bit longer, a bit less certain, you might want to check out English Eerie. A journaling game set in different time periods, but all quite specifically English and weird. There are multiple scenarios which each unfold as you play, getting more sinister as you go. I still want to record the diary of my character in The Beast on the Moor at some point. This is the kind of game you think of when you’re walking on a hill on a grey day, looking at broken old farmhouses and barren trees with branches spiking out in every direction. 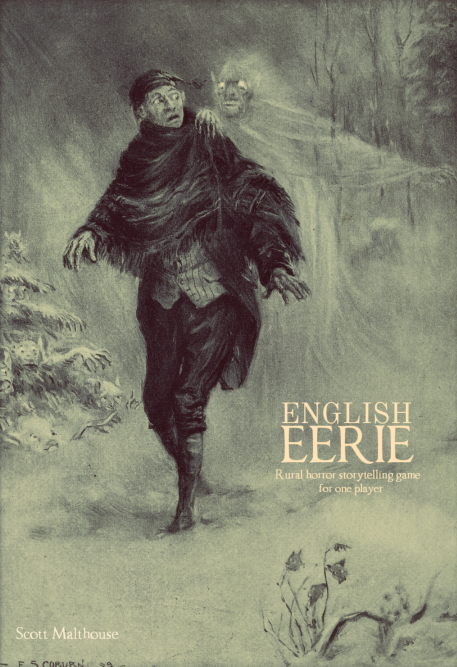 Did you know my review of this game is the second link on Google? The first of course is the book itself, but it’s neat that I’m up there. Think of this like Fighting Fantasy except you’re a kid who plays metal and needs to get a band together really quickly. It’s a short one-play game, but it’s really good fun. In addition to the usual things you also get to make things up and draw maps.

Like Metal Showcase, this is a Bully Pulpit joint. Also one I reviewed. It’s free, which is always good, although you’ll need some cards or bits of paper to draw on. Your daughter has gone into The Plant and you are going after her. This is short and interesting. The more old, abandoned factories and warehouses I see, the more I think they’re the evil fairy tale places of the modern age.

Call of Cthulhu: Alone Against the Flames

A lot of the games I’ve mentioned are journaling games of some stripe. This one is a bit more Choose Your Own Adventure-ish, using the system for the Call of Cthulhu Role-Playing Game. I really like the character creation method made through a bus trip. I died when I played this, and I don’t really feel a need to go back to it, but I enjoyed what I played. The PDF version is free on Chaosium’s site, here.

This grim fantasy game is closer to an actual RPG and can be played with more than one player if you like, but has a ton of tools to use for solo play. I admit I’ve yet to finish reading the book, which could be a mark against it for getting you quickly into play, but it’s so well put together that I can’t fault it. There are several decks of cards to help with the storytelling and a dungeon-delving expansion which was recently released.

Or any other RPG using tools like the Conjectural Role-Playing Emulator. It’s not the best solution, but it does work, using randomisers to work out different things and add uncertainty. There are also NPC tools to help with this, too.

Maybe you’re not alone, maybe you’ve got a receptive player or two. Well here are some options for that.

One of my favourite games and one which even works with people who wouldn’t normally play a role-playing game. The Quiet Year is a map-drawing game about the life of a community after the end of the world. It might be a bit close to home, but can skew hopeful depending on the group. Each turn a player draws a card, interprets it and draws something on the map. It’s able to be beautiful, silly and dark. You need a deck of cards, some six-sided dice, tokens, paper and pencils to play.

Oli Jeffery’s melancholy horror game uses a pared down version of the Forged in the Dark system to tell stories like Haunting of Hill House, Oculus and Hereditary. I’ve read Quietus a couple of times and am eager to try it out… Eager might be the wrong word, given the subject matter.

I didn’t manage to play a whole game of Murderous Ghosts as it’s a two player game and a third player unexpectedly turned up after we’d given up on him. This is a kind of narrative, competitive choose your own adventure. One player is a lost urban explorer and the other player is the haunted building they’re trapped in. It can get quite dark, quite easily.

In a similar style to Murderous Ghosts, this is an asymmetrical game where one person is managing a Mars Colony and the other is representing the conflicts which appear. There’s a standalone expansion called 39 Dark which flips over to the citizenry and the issues facing them.

A role-playing game about a forbidden romance. Maybe you’re both people from rival families, or an AI and programmer, or cryptid and investigator… whatever the situation, you are two people who want to get together, but external factors prevent it. Played using a Jenga tower, you touch the tower when you talk and when you act, you pull a block from it. The trick is that you want the tower to fall as that’s when you act on your feelings, but you can’t have it fall too early or late. You can find out more about it here.

The Hour Between Dog & Wolf

This game looks really interesting and creepy. I admit I’ve not played it but I’ve read Kate Bullock’s review and want to try it after that. This is a cat and mouse game for two players; a serial killer and someone hunting them.

A very small and short game, you can even play this on a call with someone. You play a series of calls either taken or missed between two people. You don’t know whether the other person wants the relationship to get closer or father apart by the end of the game, but cross off options from the conversation list as you go. You can download it here.

An anthology of two player games. These include games where one player is a pilot and another’s a mech, multiple epistolary games and one where you communicate only through emails from an abandoned email account. It can be found here.

One of the winners of the 200 Word RPG contest in 2018, this is a game of Regency heroines writing letters to each other. Nice and simple, playable on either side of a door, but I’m sure you could actually write and post the letters to one another. It’s found here.

These are games specifically made for two players or for small groups. It is possible to run games intended for larger groups with only a couple of players. Let me know if you’re running something for a small group during this time, either from the above or anything I haven’t mentioned.