What art inspires your game?

I love using art in games, mainly for markers of who people’s characters are in game and on Obsidian Portal.

The main ‘art’ I use for my games tends to be photos of actors or random models. Inspired by Epistolary Richard, I printed out a bunch of photos and stuck them onto business cards to hand out to players. This way the heroes and villains could have faces. For games like Amnesiac City, anyone who died was crossed out and left on the table, showing the increasing body count as the three-season series came to a close.

This kind of style also adds a sense of recurrence to some of the characters. For ages we always had someone who was played by Mark A Sheppard as he seemed to be in every television show for a while. A loud member of the Blackstone Sentinels was played by Brian Blessed and a nihilistic non-binary ex-noble was played by Tilda Swinton.

As I’ve been thinking about this, I hadn’t just used faceclaims in RPGs recently. There was a point when I had a copy of Photoshop and tried to make CCG cards based on some of my games. I made a bunch of Legend of the Five Rings cards for our characters which I think are all gone now. I do still have some Buffy ones, which I think I discussed with folks on the Buffy RPG forums, a rare RPG forum which I actually engaged with. In discussing TV shows of a comparable level in order to get castings, people mentioned a bunch of shows including one I became a massive fan of, Gilmore Girls. Without any context for the cast, I ended up using the actors of Dean, Jess and Paris all as cast members, just based on how they looked. I gave Dawson’s Creek a second attempt at a watch, which was a formative show for the genre but not really good. Then also 7th Heaven which was pretty terrible. The Buffy CCG wasn’t all that good and I’ve no idea if my mechanics actually worked, but they made for good representatives of the cast and their locations.

A few of the cast. 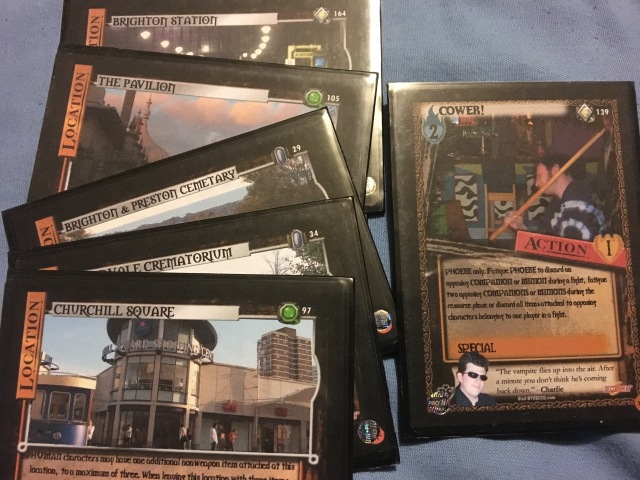 I made a few cards for local locations. Also some action cards… also yes, I tried to look like one of Smashmouth when I dressed up fancy when I was younger.

Like Loading...
This entry was posted in rpg and tagged buffy, faceclaim, rpg, rpgaday, rpgaday2018. Bookmark the permalink.