Posted on September 9, 2018 by fakedtales

Hey, you heard of the Wind Rattlers? They’re an all-girl gang led by one Renesha Sharp. She’s young but managed to outwit the police and evade capture for a good couple of years now. Kowalski and LaRoux were staking out the lair of the Fuzzy Dice Gang when they saw she was in there with them. She’d got the drop on the Fuzzy Dice and was torturing some of them for any intel. Kowalski freaked out and now she’s got them in there, looking to use them as leverage. She’s not planning on going anywhere and she’s calm for now. See if you can take advantage of that.

We’re at the end of the core campaign for Crime Wave. Where Lijah started us off by just wanting out of a bad situation, Renesha is fine staying there. She’s got no escape demands and as I found out later, that’s with good reason.
Looking at her abductor card, she gets angrier the better your dice pool is. I think this is to reflect her ability to see through me if I talk too much or try to overthink what I’m doing. The more off the cuff I am, the better I am, unless you count having dice and higher odds of success as ‘better’.

The first thing, like most games of Hostage Negotiator, is to find out her demands. If the mechanics of the abductor aren’t clear from their main card, they will be once you’ve revealed their demand. Of course, this also makes her angry, so it’s a tricky first play. With only a partial success I didn’t generate conversation points but found out she wanted her gang to be left alone. This also put some little markers on the conversation point scale. These are new to this expansion and help point out something important. The demand she had meant that if I generated too high or low an amount of conversation points then things would get worse. This is where an amount of cat and mouse came in, as I had to work in more and more constraints. Oh, and put another demand in play. Much like Lijah’s constant stream of new escape methods, Renesha had more major demands to make. To prove who was in control here, she killed a hostage. A great start.

Renesha’s next demand was more of a boast, which triggered if it was the only demand left, followed by another demand showing up with it. I calmed her down temporarily, just enough to know she’d blow up with the next roll. Making a roll with five dice (three from her disposition and two from the previous roll) really paid off! It was for some conversation point generation and I decided to trigger The Rock in order to double my points. I was still using The Rock as she’s just such a good character for an early game boost. I will change her up sometime soon. 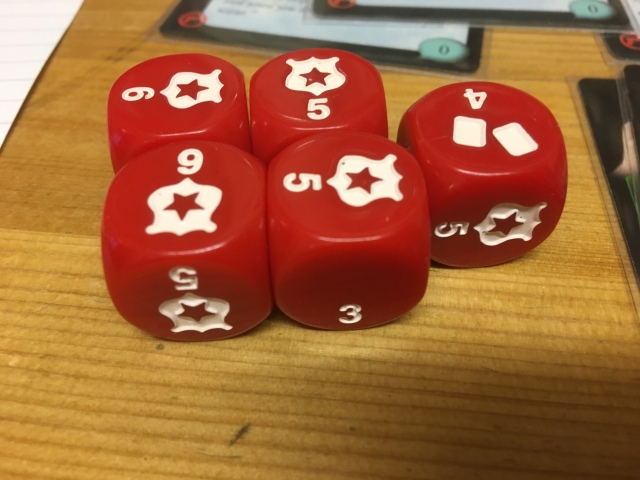 This did trigger her first demand of ‘leave the others alone’, but that only lost me one card. I took ‘little compromises’, which I’ve noticed does tend to be the key of so many plays of Hostage Negotiator. With that and a ‘tight spot’, I had a risky round, but a rewarding one, leading out some of the hostages. To close things out, one hostage managed to flee of their own accord and then Renesha killed another, while this was the fate of the cards, it also felt like a dramatic retort to my success.

I managed to calm things down a little bit, using a lot of cards to chill Renesha out to mitigate the inevitable increase she had. As I’d been rolling a lot of ‘roll some extra dice’ results, I was also inadvertently pissing her off. ‘Keep cool’ was a pivotal card for these plays. She calmed down a little and just wanted to be understood. She also wanted water, which was a bit more tangible. I admit I’m a bit hard on the demands, but sometimes the minor ones like water can just about be conceded.

I tried another ‘keep cool’ and she did a little. Another quick bit of escorting and now three people were left, five were out and only one new person was dead.
Now I just needed to keep her calm enough to get the last of them out and surrender. This wasn’t going to be easy. With one partial success and one failure I was able to buy ‘take a breather’ but that was it.

She’d barely calmed down and guess what happened? She’d captured ANOTHER hostage? Where the hell did this one come from? The bastard! I think a paramedic or someone got too close trying to recover the wounded. I asked about her demands for the final one and that angered her again. Still, it gave me +2 dice to the next roll which again would piss her off but allow me to try escorting someone out. Two got out, one died and it triggered ‘I just want to be understood’, which in turn triggered, ‘good game, sucka’, which put an end to my good game.

I was at the end of the Terror deck, the pivotal event. She had one last hostage to get out and no more major demands. I hadn’t come through for her on the water though, which was the last straw.

Bang. The last hostage was killed.

I managed to stop her in the end, but that was it. Three dead, seven saved and Renesha behind bars.

This one was interesting, stressful and a good example of how you wild a game gets when you’ve no idea what the scenario will bring. Next up I have the first of the Abductor packs, which is really exciting as it’s all hidden inside a booster pack.