Posted on September 2, 2018 by fakedtales

Witnesses heard gunshots in the petrol station half an hour ago and called the police. They ID’d the man as one Barrett Mullins. He’s armed, has at least one fatality under his belt that we know of and seven people left in there with him. We don’t know what he wants, he’s been uncooperative, volatile and keeps yelling about showing ‘them’. We had a look at his social media to see if he’s any clearer there but it’s all frankly incomprehensible. Sorry to say, but you’re going in blind for this one.

It’s been longer than I intended with this campaign, but here we are with part two!

I’ve played through the original Hostage Negotiator a few times (once I’ve done the new abductors I’ll return to the originals as I have bonus cards for them) and expected these three to be pretty similar. So far they’ve not, with Lijah not having a plan but wanting to escape. That was a good way of easing us into the game. Now we’re in pretty deep with a character who’s already at the end of the threat scale, having just killed a hostage. This is going to be tricky. I selected The Rock as my negotiator as she’s a great person to gain a sudden boost of conversation points when you hit crunch time. I’ll change up who I’m using at some point. Just not today.

Barrett Mullins: Attempt One
My gaming table is currently the kitchen table, so I washed up the dirty dishes which were already there, set everything up and then the washing machine broke. The game would have to wait, so I packed everything away in a couple of baggies in the box. Another good aspect of the larger box.

Barrett Mullins: Attempt Two
A couple of weeks and a new washing machine later, I was able to unpack Barrett and finally figure out what the hell he wants.

The biggest problem to start us off was less that Barrett’s motives were unclear; most abductors start that way. It was that he was maxed out on anger and going to kill again if I wasn’t careful. With Barrett’s anger so high, I was only rolling one die to start off with. I’d need to get him to cool his jets before finding out what he wanted or getting some of the good conversation cards.

He initially chilled out a little, at the cost of some conversation points which brought me down to -2. Then a terror card immediately shot him back up to, “K”. The next turn had me low on cards as I couldn’t buy anything. I tried to ask for his demands, failed and he killed another hostage, shouting that I wasn’t listening to him. 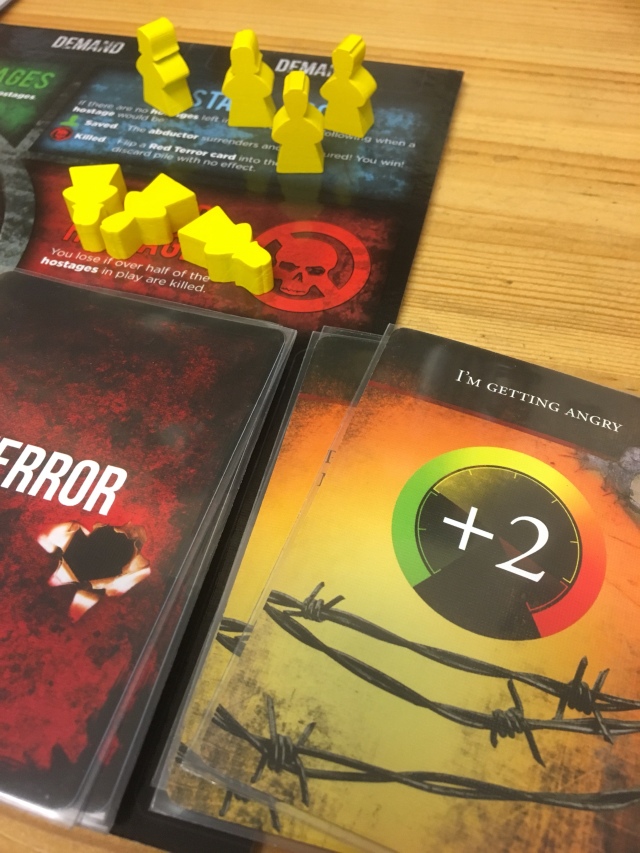 After such an abysmal start, the moment I got a good amount of conversation points I immediately used The Rock’s ability, doubling them. I bought some Little Compromises. My victory was short-lived as he got angry and killed again. There was no half-measure with this guy, put a foot wrong and he was back to murder.

The compromises went well and I got him to have a bit of a rest, but the terror deck seemed to be both self aware and hateful of me, with two impatience cards and a show of weakness. While two people had been freed now, the clock had sped up considerably. Three people were dead and things weren’t looking good.

Another breath and my rolling skills went the way of my role-playing group. You would think there are only 1-3’s printed on the dice sometimes. Maybe they’re in cahoots with the Dead of Winter die?

I managed to get more Little Compromises and Keep Cools, bringing him down to a 1 anger. He’d chilled and revealed that I needed to speak to his lawyer. He was having a bit of a problem with his parents’ divorce. Apparently his mum drove away his dad and took him to the cleaners. He couldn’t cope with this and lost all his chill in the most extreme way.

It hit the point where I had one hostage left to scrape a bare minimum victory. I bought back the Little Compromises card and still had the reroll cards from a previous turn. I was ready to get through by the skin of my teeth.

Then one of the hostages escaped! The brave little soldier! He fled and Barrett noticed a moment too late, spraying bullets at the door. I confidently went into the final conversation and Barrett handed over his final hostage before surrendering!

I breathed a sigh of relief. It’s incredible how a game involving flinging some dice can get you so tense. It wasn’t a great victory though, not with those three bodies Barrett left behind. I was totally shocked that I managed to turn the game around and luck certainly played a helping hand with the fleeing hostage.

Next time, I’ll be dealing with the leader of a gang who has many demands, but doesn’t care about escaping. Hopefully I’ll be even half as lucky as I was here.